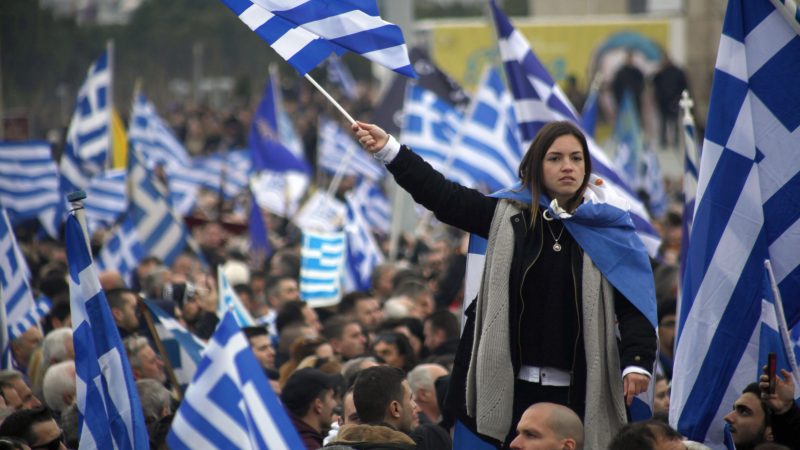 Thousands of people gathered in central Athens on Sunday to demand that the Hellenic Parliament not ratify the agreement on the change of name of the Former Yugoslav Republic of Macedonia (FYROM) to Northern Macedonia. Voting in the House is scheduled later this week.

A sea of blue and white flags and the Greek Orthodox Church have covered the square of Syntagma, at the gates of Parliament, and from the loudspeakers scattered throughout the area and the adjacent streets have sounded the national anthem and patriotic songs.

Exchange of petrol bombs and tear gas between some groups of protesters trying to enter the parliament building and anti-riot police. pic.twitter.com/dmO6fda9D6

The organizers estimate that the participation has exceeded 600,000 people, while the police reduced the figure to 60,000. In any case, the influx of protesters has been smaller than expected and has not reached last February, when around one million people, according to the organizers (140,000, for the police), gathered at the same place in against the agreement. In Thessaloniki, a month earlier, 400,000 had been concentrated (90,000 according to the police).

Several thousand police officers were deployed to avoid incidents, given that shortly before the start of the rally antifascist groups had called an anti-nationalist demonstration. At the end of the rally, there has been an exchange of smoke cans and homemade explosives between the riot police and groups of demonstrators trying to gain access to the Parliament.

Police trucks have blocked access to the street where the government and Presidential buildings are located, and drones and helicopters from the security forces have followed the protest from the air.

The demonstration has been called by a nationalist platform called the Macedonian Fight for Helenity Committee, which brings together diverse associations of citizens, but also of the Orthodox, military and Greek church of the diaspora, especially important in Australia and the United States.

People of all ages and even political tendencies have joined in their rejection of what they consider a “betrayal” of the Greek homeland: the agreement between the Governments of Athens and Skopje to give a definitive name to the former Yugoslav republic that aims to end with a conflict that has lasted since 1991 , when Macedonia became independent from the Yugoslav Federation.

With banners in which you could read slogans such as “Left Fascists, hands out of Macedonia”, “Referendum already on Macedonia” or “Macedonia there is only one and it is Greek”, the tension against the Government of Alexis Tsipras is palpable. The latest polls on the issue confirm opposition to the agreement of 70% of the Greek population.