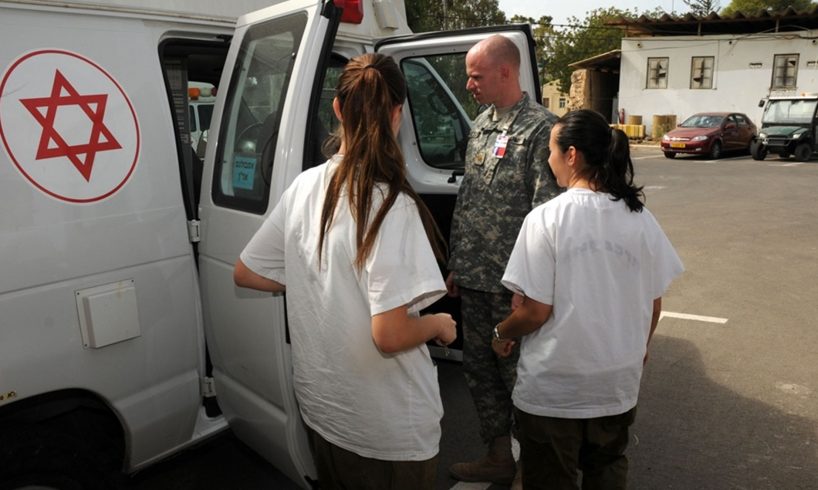 An ultra-sophisticated telemedicine system and exemplary reactivity, the Hebrew State uses high-tech to fight against the virus. While mobilizing its powerful surveillance services. Is it sufficient ?

This is a feat worthy of the “start-up nation”: it only took a few days for the team at Chaim Sheba hospital in Ramat Gan, in the suburbs of Tel Aviv, to transform a parking lot into special unit for Covid-19 patients. Forty resuscitation beds at the cutting edge of medical progress, thanks to the establishment’s close collaboration with the associated technological innovation center. “We told them  : Give us everything you think is useful,” says Pr Arnon Afek, deputy director of the hospital. A protocol had to be established as quickly as possible to treat these patients with minimum risk for the teams. For that, we needed to explore together all that technology has to offer. “

The result: an ultra-sophisticated telemedicine system with non-contact sensors to monitor and analyze respiratory patterns, “smart stickers” that monitor blood pressure, oxygen saturation of the blood and pulse. Caregivers even have a “coronamobile” to move around safely.

In this crisis, Jerusalem has not failed to react, closing its borders from 4 March to nationals of several European countries, including France, launching a massive screening campaign, and above all by mobilizing its major asset: the world of high -tech. More than 320,000 Israelis work in innovation companies, about 10% of the workforce. Mobile applications for monitoring patients at home, voice analysis to detect symptoms of the virus, or, as at Sheba hospital, setting up innovative telemedicine tools. A dive into the science of tomorrow – available for the moment in a few large urban centers only.

The controversies, however, have not spared the Hebrew State. So on the lack of respirators. In early April, there were 2,864 in the country, including those in the military, when projections raised the possibility of 5,000 patients needing respiratory assistance. The Mossad itself was reportedly mobilized to procure new devices for hospitals on foreign markets.

He is not the only security service to have been involved in this crisis. On March 16, the acting Prime Minister, Benjamin Netanyahu, announced the use of Shin Bet, internal intelligence, and authorized the use of means usually intended for the fight against terrorism. The goal ? Trace the patient’s routes, list the people met and alert them of their possible contamination so that they isolate themselves. Solutions that interest France: they were mentioned during a meeting between the French and Israeli Ministers of Justice.

Criticized by defenders of individual freedoms, the program is now overseen by a parliamentary committee . And he is not the only one to raise the alarm. According to local press, the Minister of Defense launched a joint project with the surveillance company NSO – a company suspected of having supplied Saudi Arabia with the spyware that was used to track down journalist Jamal Khashoggi, before he was not assassinated in Istanbul on the orders of Riyadh.

To what extent can these surveillance tools be used in the fight against the pandemic? For the moment, fear of Big Brother does not seem to be a priority for the Israelis, who are more concerned about their health than their data. More than a million of them downloaded the Hamagen app (“shield”) in order to be immediately alerted if they take the route of an infected person.

The fact remains that in the land of new technologies, a very small minority are falling through the cracks. 50% of the cases identified come from the ultra-Orthodox community which represents only 10% of the population. Religious cut off from the modern world, without smartphone or internet connection.