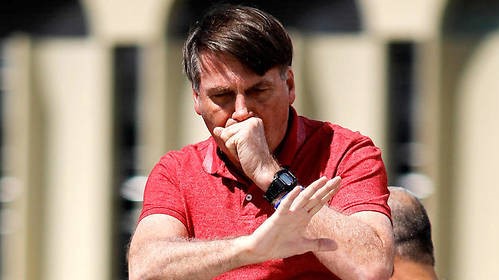 Thirty years after the return of democracy to Brazil, protesters are calling for military intervention to end the confinement desired by Congress. Without a mask and coughing, President Bolsonaro came to support them.

Brazilian President Jair Bolsonaro went to support protesters who, not respecting the rules of confinement against the coronavirus , massed in front of the army headquarters in Brasilia to demand a military intervention and the closure of the Congress, Sunday April 19.

“We don’t want to negotiate anything , ” launched the far-right president, standing in the back of a pickup truck, to agglutinated protesters, holding up signs calling for “military intervention with Bolsonaro” while the latter , without mask, coughed throughout his speech.

These protesters are demanding the application of a law which in 1968 imposed the closure of Congress and removed many constitutional rights.

“I am here because I believe in you and you are here because you believe in Brazil,” yelled the president a few meters away from the crowd. Children, the elderly, a few people wearing masks were in the front rows of the procession, which attracted around 600 people.

Jair Bolsonaro constantly criticizes the leaders of the Congress, the governors and the mayors who defend the policy of containment and social distancing aiming to stop the spread of the coronavirus which made more than 2,400 victims and contaminated more than 38,000 people in the country.

The head of state minimizes the lethality of the virus which he describes as a “gripette” and promotes rallies. He has expressed himself several times in favor of the reopening of shops and schools.

“You have to fight for your country. Count on your president to do what is necessary so that we can guarantee democracy and what is most dear to us, our freedom, ” said Jair Bolsonaro.

During his address, interspersed with coughing fits, the Brazilian president did not question the protesters’ call for military intervention or the closure of Congress.

The intervention of the head of state was condemned by political leaders and a high magistrate.

“It is frightening to see demonstrations in favor of the return of a military regime, 30 years after the return of democracy,” said Luis Roberto Barrozo, judge of the Federal Supreme Court (STF).

“It is appalling that the president has joined anti-democratic protests. It is time to unite around the Constitution against any threat to democracy, ” wrote Fernando Henrique Cardoso, former president from 1995 to 2002, on Twitter.

It is the “perfect recipe for a tragedy,” said Gleisi Hoffmann, president of the Workers’ Party (PT) of ex-president Lula.

A majority of 68% of Brazilians approve of containment despite its impact on the economy, according to a survey by the Datafolha institute published on Saturday, slightly less than in early April (76%).