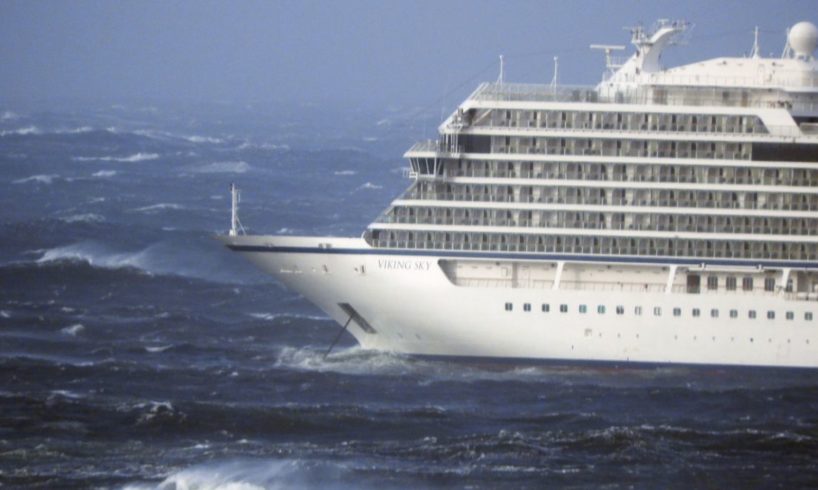 A failure in the engines of a cruise, with 1,300 people on board, has forced this Saturday to carry out a complex evacuation operation of the passage in Norwegian waters, about five kilometers from the coast of Hustadvika, east of this Nordic country. At 9:30 in the evening about 140 people had been evacuated and there were at least nine injured, three of them serious, according to the Norwegian media NKR. Some videos broadcast on social networks show a devastating situation on the ship, with furniture moving from one side to another and pieces of the roof falling off.

“The Viking Sky cruise ship has sent a distress signal, due to propulsion problems in a bad weather situation, it is going to land, we have sent several helicopters and boats to the area,” the county’s rescue services said in a first statement. de More and Romsdal. The first alarms were activated around two o’clock in the afternoon and soon after, a reception center was started in a sports pavilion near the coast, waiting to be evacuated to the passage.

While the complex evacuation operations continued, an attempt was made, in parallel, to reactivate one of the cruiser’s engines to try to restart the Viking Sky. The Norwegian rescue services reported in the following hours on their Twitter account that five helicopters are participating in the evacuation operation, as well as an undetermined number of vessels.

The rescue operation is expected to be long since each helicopter can transport between 10 and 15 passengers each way. Both the crew and the passengers aboard the cruise are in a stable situation, local press quoted police sources as images of the cruise began to spread on social networks, subject to strong waves and harsh weather conditions.

The waters of the Hustadvika coastline are considered a complex area for navigation since winds and marine currents are frequent. El Viking Sky began its journey on March 14 in the western Norwegian city of Bergen. The ship was going to pass through the cities of Narvik, Alta, Tromso, Bodo, Stavanger and Tilbury where he planned to arrive next Tuesday.