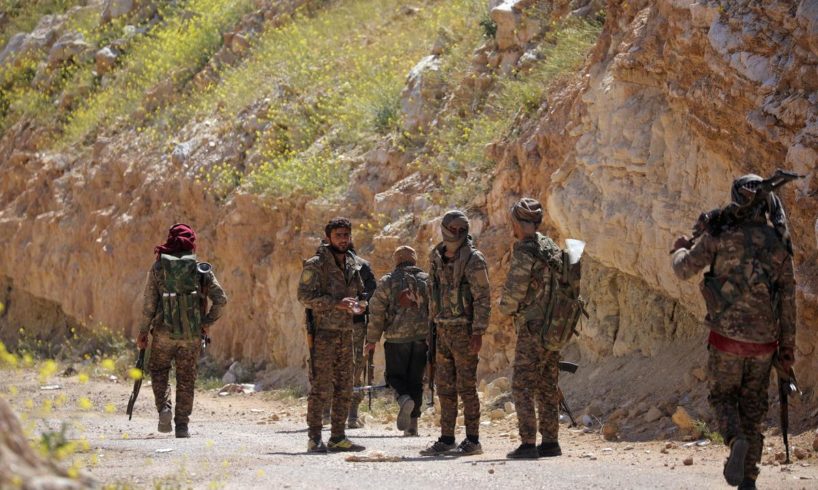 According to the United States, the caliphate proclaimed by the Islamic State terrorist group in 2014 is “one hundred percent eliminated” in Syria. This was reported by the White House spokeswoman, Sarah Huckabee Sanders.

The US president, Donald Trump, said for his part that the “100%” of the Islamic State (IS) group has been defeated in Syria. Trump accompanied these map statements he showed to the journalists. In one of them the areas occupied in the past by the IS were seen, and in a second map the current situation was seen, without the presence of the jihadist group.

The Islamic State or Daesh (in Arabic) established a caliphate in Syria and Iraq in 2014, a form of state led by a political and religious leader where Islamic law is applied. Until 2017, the terrorists of this group managed to gain control of at least 40,000 square kilometers in Iraq and Syria, almost the territory of Belgium. However, other analysts spoke that they controlled much more.

However, for two years, the Islamic State has suffered several defeats. The Kurds, who have been the terrorists’ greatest enemies and the most effective tool to achieve their weakening, managed to take away a lot of territories. The attacks of the international coalition, led by the United States, also played its part. And that’s why they were cornered. According to press reports for months, there have been massive demerits of IS militants, many of them foreigners who today do not want to be received by their countries of origin.

Since the beginning of this year, what remains of the Islamic State resisted in its last bastion in eastern Syria, in the town of Al Baguz, right on the banks of the Euphrates River, near the border of Iraq.

The jihadists retreated with hundreds of vehicles to that area, less than a kilometer long, by the push of the Democratic Syrian Forces (FSD), the amalgam of Kurdish and Arab militias that fight the ISI with the support of the coalition international led by the United States.

This week the Kurds took control of an Al Baguz camp where the jihadists had entrenched themselves in recent weeks, after heavy fighting. To illustrate his progress on the terrain in recent days, the Kurdish responsible published a series of maps in which the shrinking territory of the “caliphate” is narrowed, now reduced to a few hundred square meters.

The last IS fighters in Syria were in the last hours surrounded by the FSD by three flanks and behind them, they have the Euphrates River, on whose opposite bank is the Army loyal to President Bashar al-Assad, who expelled the radicals from the territories that they controlled in that area.

The advance of the militias had been slow since they began their final assault against the IS, at the beginning of February.

The military campaign has been stopped on several occasions to allow the departure of civilians from the area, most of whom are in precarious conditions due to lack of food due to the long siege of the FSD over the last stronghold of the IS.

Since January, more than 60,000 people have been evacuated from Al Baguz, including combatants, their families and other civilians, a number that has surprised the FSDs themselves and humanitarian organizations, due to the small size of the border population.

The vast majority of women and children have been transferred to the displaced camp of Al Hol, located about 300 kilometers to the north, where 67,000 people have arrived since December, from Al Baguz and other neighboring towns that were in the hands of the IS .

Meanwhile, the nearly 5,000 combatants who have surrendered, according to the FSD, are interrogated and arrested in detention centers under the control of those forces. This Friday the United States announced the total liberation of that population.