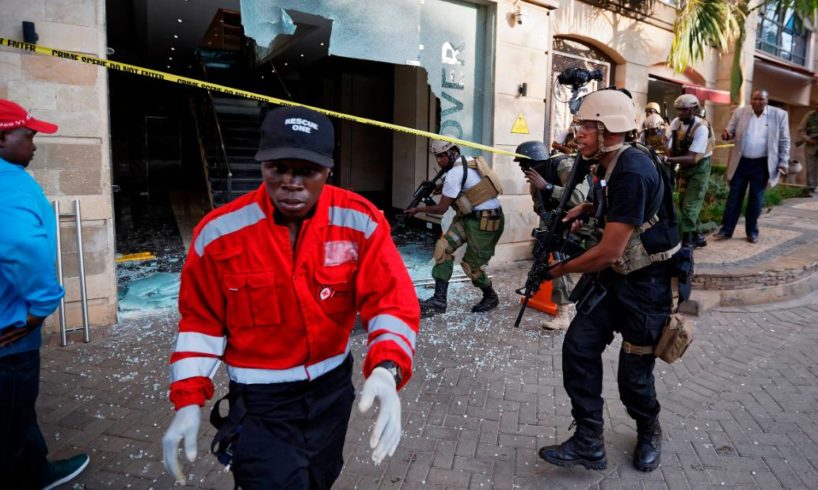 Kenyan security forces on Wednesday ended the attack by the Somali Islamist group Al Shabab against a Nairobi hotel complex after almost 20 hours of siege and left at least 21 dead and several wounded, a police chief confirmed in a statement. televised

“I can confirm to you that the security operation in (the complex) Dusit ended about an hour ago and that all the terrorists were liquidated,” Kenyan President Uhuru Kenyatta said at a press conference early in the morning.

The attack began with an explosion at the entrance of the hotel and office complex Dusit, in a well-off neighborhood of the Kenyan capital. “There was a bomb, there are many shots,” said one of the employees of the offices. The explosion was heard more than five kilometers from the place and followed by shots for more than an hour. The Somali terrorist group Al Shabab has claimed responsibility for the attack.

The president has not revealed the total number of jihadists who participated in the attack. The video-surveillance images broadcast by the local press show four men equipped with automatic weapons and grenades entering the complex. At least one jihadist was blown up at the beginning of the attack. A police source said two attackers were killed Wednesday morning in a shootout. “Both had red scarves on their foreheads and cartridges tied to their chests, each had an AK-47.”

Kenyatta has specified that “at this moment we have the confirmation that 14 innocent lives were lost, others were injured”. Among the injured is a Spanish citizen residing in Kenya, according to sources from the Diplomatic Information Office (OID). The Kenyan president also praised the work of the security forces. “More than 700 civilians were evacuated from the complex from the beginning of the attack to the early hours of the morning,” he said.

Eyewitnesses counted 15 corpses: 11 Kenyans, one American, one British and two other people whose nationality is unknown. Police sources also reported at least 15 deaths. Alleged victims gathered on Wednesday near the morgue, but were not allowed to see the bodies. “My sister is not in any hospital and the last time we spoke, she suddenly started crying and screaming, and I could hear gunfire,” cried a woman named Njoki. “We have no doubt, your body is here.”

The attack was claimed by radical Islamists Somali Al Shabab, a group that Wednesday released a two-page statement in which they say the attack is a response to the decision of US President Donald Trump to move the embassy in Israel to Jerusalem. The change of the seat of the legation implies the explicit recognition of this city as the capital of the State of Israel.

The device used resembles that of other attacks perpetrated by these jihadists in Mogadishu: a bomb explodes (by means of a kamikaze or a car bomb) and then a command enters the building to kill as many people as possible.

The attack reminds residents of Nairobi in 2013 against the Westgate shopping center, which caused 67 deaths after four days of siege. The intervention of the security forces was then criticized.

In a statement in New York, the UN Secretary-General, Antonio Guterres, “firmly condemned” the attack, described as “cowardly” by the president of the African Union Commission, Mussa Faki.

The Al Shabab, expelled from Mogadishu in 2011, lost most of their strongholds. But they continue to control important rural sectors from where they launch guerrilla operations and suicide attacks.