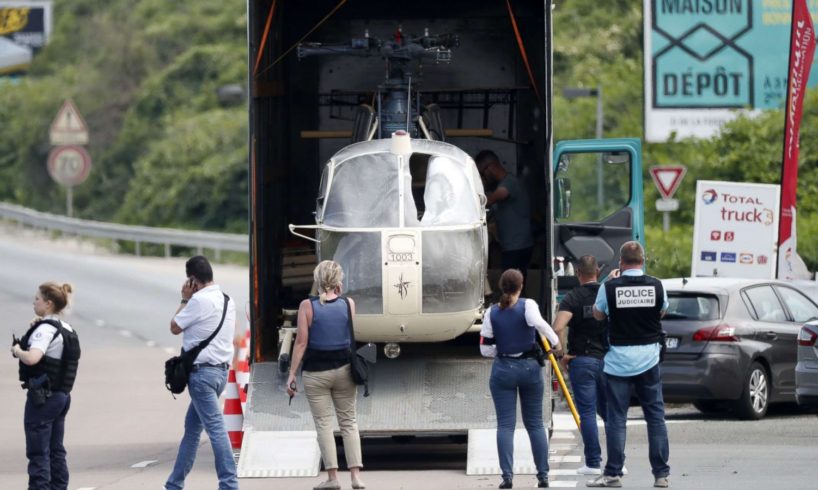 Redoine Faid was considered until this Sunday as a professional robber. It was his letter of introduction. His reputation was such that he had written a book called Braqueur (Reaver), which he had promoted with television interviews and had given him some fame. She was a small celebrity in the French black chronicle. Now you can also put on your business card “professional evasion”.

Faid, 46, escaped from a prison near Paris on Sunday, his second escape in five years. The method was even more striking than in the previous one, when he took several hostages and burst five doors with explosives in a prison in Lille, in the north of the country. This time, he fled by helicopter. The operation lasted a few minutes. He had three accomplices. There were no injuries.

There remain to know some details of the evasion of the center of Réau, south of the French capital, and the fugitive is still unknown. But what is known would be enough to write the synopsis of one of those gangster films to which Faïd is addicted, and that, as he said, gave him ideas for his criminal career.

It was 11.15 when a helicopter landed in the prison yard, according to witnesses quoted by the French media. He transported the accomplices, who had previously hijacked the aircraft at an airfield in the region and forced the instructor to take them to their destination. Two members of the command got out of the helicopter and forced the entrance of the booth where at that time Faïd spoke with his brother. They were hooded and armed with rifles.

Everyone was fast. “The evasion lasted only a few minutes,” says a statement from the Ministry of Justice. At once the helicopter had left, with Faïd inside. The device was abandoned 60 kilometers from the prison, north of Paris. There the assailants and the escaped released the pilot and fled in a vehicle on the A-1 motorway.

The Minister of Justice, Nicole Belloubet, went to the scene and explained that a few months ago officials saw some drones flying over the place. They could serve to prepare the action. Almost 3,000 agents are mobilized to find the fugitives, according to police sources quoted by Le Figaro.

Redoine Faïd had just been sentenced to 25 years in prison for a robbery in 2010 in which a 26-year-old police officer was killed. He had also been sentenced to 10 years for the evasion of Lille prison in 2013 and 18 for an assault on an armored car, one of his specialties. “The most,” he said once in an interview.

The publication of his book in 2010, whose full title was Reacador. From the outskirts to the great banditism, it allowed him to strut around the media. He explained that he wanted to turn the page and that there was nothing further from his intention than to advocate crime.

The journalist Jérôme Pierrat, who co-wrote the book with Faïd, portrays him in an interview in Le Parisien as a mythomaniac, a neighborhood boy intoxicated by fiction, raised in a family of 11 brothers, a precocious delinquent who was already robbed at 18 banks. “His first blows were even inspired by movies,” says Pierrat.

“There’s a lot of talk about Heat, about Michael Mann, but he told me that his favorite was The Loner, by the same filmmaker, the story of a thief. And there’s also Reservoir Dogs of Tarantino “. Pierrat and other people who interviewed him also describe him as someone very intelligent, a born seducer. “Everything opposed to the archetype of the sociopathic gangster, which made him popular with the prison guards,” according to the aforementioned journalist.

Beyond the mythomania -the one of the criminal and one of his was new evasion leaves in a bad position the prison authorities. The writer, as some called him, has again made fun of them. The previous time they found him a few weeks later in a motel. The new chapter lacks the conclusion.