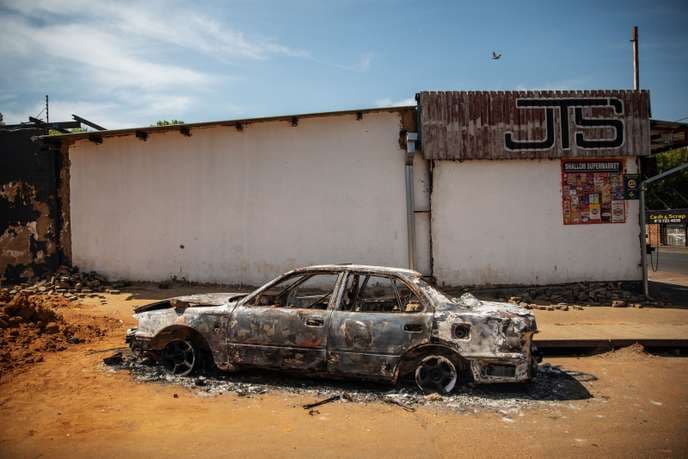 In Johannesburg, the return to normalcy is gradually beginning. Since Sunday, South Africa’s largest city had been the scene of serious violence and xenophobic riots. Five people were killed. While more than 200 others were arrested, law enforcement and the government have struggled to contain the events. What happened ?

A fire ignites the powders

The wave of violence and looting began on Sunday, September 1, after three people died in a still unexplained fire in a building in downtown Johannesburg, the country’s main city, before spreading to other parts of the city and then to Pretoria, the political capital about 60 kilometres away.

On Monday, the centre of Johannesburg was invaded by hundreds of people armed with clubs and stones who set fire to and looted many shops, often run by foreign traders. African immigrants, particularly Nigerians, are the main target of this violence.

Serious incidents also occurred during a controversial strike by the country’s truck drivers, who denounce their employers’ increasing use of foreigners. Police arrested at least 20 people in KwaZulu-Natal province alone, in the northeast of the country, after several trucks were set on fire, a local police spokesman, Brigadier Jay Naicker, reported.

«The South African people are hungry but they stay at home, while companies in the country prefer to employ cheaper paid foreigners » said Sipho Zungu, a representative of a truckers’ union, to AFP on Monday. «We have been talking to the government and the bosses for two years, but there is still no solution. »

The main trade unions in the sector condemned the violence and distanced themselves from the movement.

Since the beginning of this episode of violence, scenes of looting of foreign businesses have been taking place at night in Johannesburg. Many ultra-violent images (scenes of beatings, which we have chosen not to relay here) have flooded social networks. On Tuesday, police fired rubber bullets into central Johannesburg to disperse hundreds of people, some armed with machetes and axes.

«They burned everything,” said a Bangladeshi businessman, Kamrul Hasan, in front of his burning business.

Police announced that they found two charred bodies in Johannesburg on Wednesday. This brings the death toll to at least seven since Sunday. «The greatest” number of victims are South Africans, Police Minister Bheki Cele said earlier.

«These are charred bodies, two bodies in a business that has been burned” in Alexandra township, a Johannesburg police spokesman Wayne Minnaar told AFP.

The violent images broadcast on social networks raise fears that the toll of this violence may increase.

The government called upon to  «come out of hiding»

The opposition accused President Cyril Ramaphosa of inaction in the face of the riots and called for “coming out of hiding and taking action ». Until then silent, he finally took the floor on Tuesday afternoon to “condemn in the strongest terms » xenophobic violence:

«Attacks on foreign traders are totally unacceptable. I want this to stop immediately. »

«There can be no justification for a South African to attack people from other countries,» insisted the president of the “rainbow nation» who called an emergency ministerial meeting.

«People cannot be allowed to make the law,» said David Makhura, the «Prime Minister» of Gauteng province, which includes Johannesburg and the capital Pretoria. «There is not a single country where there are no foreigners. All countries are facing the problems of refugees, asylum seekers» he added to the press in Alexandra Township.

Police Minister Bheki Cele had estimated the day before that Monday’s violence was more of a «crime” than a «xenophobia». «Xenophobia is used as an excuse» he said after a tour of the affected neighbourhoods.

Concern is spreading to other countries on the continent

This outbreak of violence has taken a continental turn. The president of the African Union Commission, Moussa Faki Mahamat, denounced Tuesday’s “despicable” attacks.

Nigerian President Muhammadu Buhari said he was “very concerned” about the violence against African immigrants, especially those from his country, and announced the arrival of a “special envoy” in South Africa.

Many Nigerian personalities have called for a “total boycott” of South African companies, such as TV programme provider DSTV or telecom giant MTN. On Wednesday, security was tightened around South African brands in Nigeria after calls for violence.

On Tuesday evening, Zambia announced the postponement of a friendly football match between its national team and South Africa on Saturday “for security reasons”, said the federation’s secretary general, Adrian Kashala.

A return to the expected calm

Calm finally returned on Wednesday in the streets of Johannesburg, which remain under high police surveillance.

Businesses have tentatively begun to reopen in the city centre and the township of Alexandra, the scene of violent riots. Some residents would search through the rubble of shops to collect food or sheet metal.

On Wednesday morning, President Cyril Ramaphosa once again condemned the violence that broke out in Johannesburg on Sunday. “Everyone is welcome in South Africa,” he said.