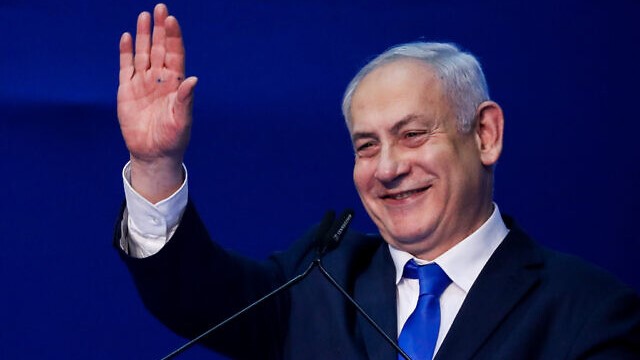 Despite being charged with corruption and his upcoming trial, the Israeli Prime Minister is heading for a record victory in the legislative elections. But “Bibi” is not guaranteed to be able to form a coalition government.

New record for Benyamin Netanyahu! If the results of the legislative elections of March 2 are confirmed, not only the leader of Likoud arrives at the head of the ballot with 36 seats, but, what is more, after fourteen years in power, including eleven consecutive, he hangs his best score for a right-wing party in the history of Israel.

Two weeks before his trial for breach of trust, corruption and fraud in three different cases, the Prime Minister therefore races ahead with four seats ahead (partial results – 90% of the votes counted) over his main opponent, the center-right movement Kahol Lavan (Blue White) by Benny Gantz. It is even on the verge of securing a majority (61 seats) in the Knesset with its allies of the nationalist and religious right. An unexpected result for the one who had to call three elections in a year, for lack, precisely, of majority.

While his opponents predicted a darker future for him, it is a new thinning that appears in the sky of the Prime Minister. “King” Bibi is this Tuesday, March 3, the “magician” of Israeli politics. Far from losing support because of its saucepans, voters instead sanctioned its opponents. If the Bleu Blanc party lost only one seat, the left coalition, with only seven seats, suffered a stinging defeat.

The only other movement to emerge clearly strengthened from this election is the coalition of Arab parties which, with around 15 seats, takes its place in the Knesset.

But what will Benjamin Netanyahu do with such a short victory? The scenarios are numerous this Tuesday morning in the face of these results, remember, still partial. While it is very likely that Benjamin Netanyahu, whose party came out on top, will be entrusted with the formation of a government by President Reuvlen Rivlin, we still do not know how. With which allies? That’s the whole question.

Once again, things could depend on the right of the nationalist liberal right Avigdor Lieberman. With six to seven seats, the latter, whose departure from the government a little over a year ago had caused the first legislative elections in the series of three which has just ended, is once again the kingmaker of the ballot . But it is difficult to know for the moment whether or not he will join the ranks by allying himself again with Netanyahu.

Holding a liberal right, Lieberman campaigned against the allied religious parties of Netanyahu. He also reiterated to his supporters Tuesday evening his promise not to return to a “messianic” government. But he also assured his constituents during the campaign that there would be no fourth ballot. Two today irreconcilable promises which can one or the other allow him to justify his next decisions.

If the religious right-wing coalition around Likud exceeds 61 seats, Netanyahu could do without Lieberman’s support. But, then, this short majority of nationalist and religious right would make the country difficult to govern, each law giving rise to endless negotiations between government parties whose least voice would become essential.

Another possible scenario: that of the national union Likoud-Kahol Lavan. After the repeated promise not to enter a government led by an accused Prime Minister, it will be very complicated for Benny Gantz to finally accept an alliance with Likud in an executive led by Netanyahu, especially when the trial of the latter whose start is scheduled for March 17.

But the leader of the centrist party risks being put under very strong pressure to prevent a fourth ballot and guarantee a stable government in the country, while the world is worried about the epidemic of coronavirus and the world economy begins to suffer the effects. of this epidemic .

Will Bibi be the first Israeli Prime Minister in office to face justice? Again, this is total blur. If the trial of the leader of Likud for corruption, fraud and breach of trust is due to start in two weeks, he still has a possibility of evading his judges. Indeed, Benjamin Netanyahu has not hidden his intention to pass a law of immunity protecting Prime Ministers during their mandate. But will he have time by March 17?

To do this, President Rivlin would need to quickly put him in charge of forming a government, get the confidence of the Knesset, and then introduce and vote on this bill. Furthermore, there is little doubt that this question of the immunity law will be part of the negotiations with the parties of the government coalition with a view to forming a government. However, if the religious nationalist parties, traditional allies of Netanyahu, support this bill, this has not been the case so far for the leaders of Kahol Lavan who have put forward the prosecutions against Netanyahu during the three electoral campaigns. Again, Avigdor Lieberman could play the referees.